“Always stay humble and kind” – a fine sentiment which began as advice from a 47-year-old mother to her children; four boys and one girl. It’s as far away from the cold, hard, shiny world of modern popular music as you can get.

Except that this mother of five is a songwriter called Lori McKenna. She put her advice into a song called Humble and Kind which is now high on the US country charts in a version sung by Tim McGraw, one of the genre’s cowboy-hatted superstars. It has the kind of finely crafted but emotionally direct lyrics that hardly ever see the light of day in pop or rock music these days.

Lori sang her own version at the O2 Indigo in London last week. She was one of five singer-songwriters lined up across the stage with acoustic guitars for a curtain-raising showcase to the C2C country music festival that filled the O2 Arena for three days. The format was pioneered at the Bluebird Cafe in Nashville, Tennessee, where backroom writers take turns to explain the history of their songs then sing them. Because this is country music, where no one is too cool for school, they have learned how to talk to an audience with wit and warmth. Because they all work in Nashville they know each other well and can keep up a steady flow of teasing banter.

Take Shane McAnally, a minor solo artist at the turn of the century who now makes a fortune writing hits for bigger names. He has 15 country No 1 songs to his credit, so when Lori joked about writing a number big enough to buy her husband a boat, Shane shot back: “Why not just come out on one of mine?” His own songs subvert the cliches of country lyrics. If you hear the title Mama’s Broken Heart you think you know the story already. But Shane’s hit, taken up the charts by Miranda Lambert, is told from the perspective of a daughter going through a painful break-up whose mother only wants her to keep up appearances. The chorus line is: “It ain’t my mama’s broken heart”.

Later in the show Miranda Lambert herself made a surprise appearance to sing a duet, inspiring squeals of disbelief and delight. She’s been country’s reigning queen for half a decade now and was one of the festival’s big-ticket names.

On the next stool to Shane McAnally, looking slinky in black see-through evening gown, sat Ashley Monroe. Her song Like A Rose opens with the lines: “I was only 13 when Daddy died, Mama started drinking, and my brother just quit trying.” Total country music cliche? Beyond doubt — but it’s the true story of her own life. She quickly demolished her own flowery symbolism one song later with a stoner anthem which goes: “Give me weed instead of roses / Bring me whiskey instead of wine / Every puff, every shot, you’re looking better all the time”. 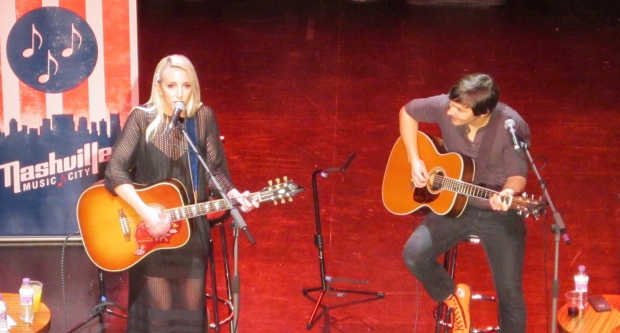 Slinky: Ashley Monroe with Charlie Worsham at the O2 Indigo

Charlie Worsham kept up the narcotic theme with a wittily blasphemous gospel tune, as yet unreleased. The chorus went: “Hope I’m sto-o-o-o-ned when I meet Jesus / Flying high, through them clouds, knowing I don’t have to ever come down”. Young Charlie, a dazzling instrumentalist with pin-up good looks, enhanced everyone’s songs with well-judged embellishments. After one number ended with a jaw-dropping flourish, Charles Esten interrupted the applause to enquire from the stool next door: “Exactly how many guitars were you playing there, Charlie?”

Esten, an actor for most of his life, is the most famous of these five names thanks to his starring role in the glossy yet surprisingly authentic TV soap opera called Nashville, which dramatises the lives and loves of fictional country music stars. When the series took off he seized the opportunity to launch a career as a real-life singer-songwriter. “It threw me in at the deep end and I’m swimming for all I’m worth,” he confessed on stage. He seems to be staying afloat. The best of his songs, I Know How To Love You Now, became a pivotal moment at the start of Nashville Season 3, to his obvious pride.

Live music shows where you know less than a quarter of the songs are often a disappointment. Setlists that last for more than two hours can leave you longing for the final encore. But with so many emotional high spots and a rare connection between the performers and the audience, nearly three hours flew by, and when the house lights finally came up most of us would happily have stayed for more.

← Every time I hear ‘John, I’m Only Dancing’ I still recall that thrill
Mirror, mirror, on the wall, who has the pointiest face of all? →